The Antipodean duo finished 2.5s clear of Franky Cheng and Martin Rump’s Absolute Racing Audi following one of the most action-packed encounters of the year. Roelof Bruins and Manuel Metzger gave Indigo Racing its maiden series podium while Martin Kodric and Dennis Lind continue to lead the standings after overcoming their 15s pitstop success penalty en route to sixth.

Patric Niederhauser also retains an outside chance of winning the senior Drivers’ crown despite his pole-sitting co-driver, Nico Bastian, being punted into retirement at Turn 1 on the opening lap. However, the Swiss must now win tomorrow and hope other results go his way if GruppeM Racing are to seal back-to-back GT3 Drivers’ titles.

Elsewhere, Reinhold Renger wrapped up the GT4 Drivers’ crown with a race to spare courtesy of win number six and a penalty that dropped BMW Team Studie’s #81 M4 from second to seventh. Two race-by-race entries ensured Sunako Jukuchou and Takayuki Kinoshita scored points for fifth, but that still wasn’t enough to deny GruppeM Racing’s Mercedes-AMG, which Renger is sharing with Ryuichirou Ohtsuka this weekend. 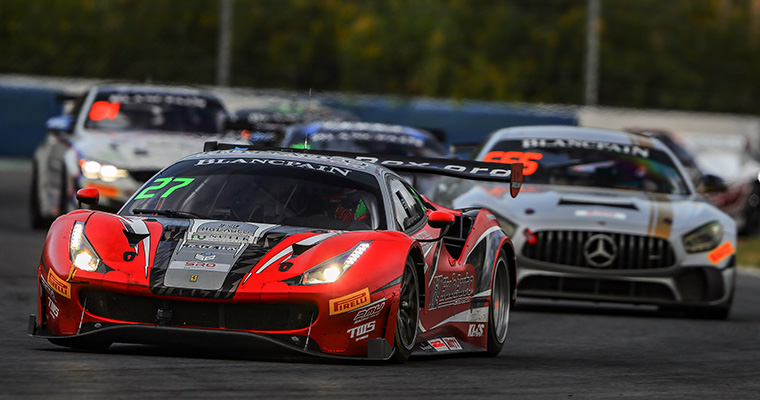 Nico Bastian lined up on pole but was down to second as the field approached Turn 1 thanks to Lind’s lightning getaway from the outside of the front row. However, worse was to come for the #999 Mercedes-AMG, which was sent spinning into the gravel trap and retirement after being hit from behind by the #23 Nissan.

The same incident also had ramifications at Turn 2 where Edoardo Liberati, following contact with Bastian, was spun around exiting the corner. The stricken KCMG Nissan was then tagged by Anthony Liu and Sandy Stuvik, both of whom retired as a result.

A lengthy Safety Car period was inevitably required, which – once racing resumed – ensured just seven minutes remained before the pit window opened. That left no time for Lind to build an advantage over Lester whose co-driver Foster emerged well clear after the stops. Absolute Racing’s Franky Cheng also avoided the lap one chaos to run third, which later became second when Martin Rump benefitted from FFF Racing’s slower pitstop.

Indeed, Martin Kodric re-joined in the middle of the battle to determine the final podium place. Initially third, he would be shuffled down to seventh by the end of his out-lap as a result of each passing move further compromising track position.

Adderly Fong, Mitch Gilbert, Aidan Read and Alex Yoong all initially played their part in a thrilling dice, but it was Indigo Racing’s Mercedes-AMG that seemingly came from nowhere to claim its maiden Blancpain GT Series Asia podium behind the Ferrari and Audi. Roelof Bruins was running ninth when the pit window opened after losing ground on the opening lap. However, the team’s decision not to change tyres helped Manuel Metzger claw back some of the lost ground before also working his way from seventh to third. A late Safety Car period to recover a stranded GT4 Porsche helped the German finish 2.3s behind Rump.

Absolute Racing’s Fong and Andrew Kim were best of the Pro/Am crews in fourth thanks, in part, to the latter jumping from 12th to fifth in the opening stint. Kodric and Lind inherited fifth post-race from the #888 GruppeM Mercedes-AMG which was penalised 30s in lieu of a drive-through for overtaking under yellow flags, and the top-six was rounded out by OD Racing’s Gilbert and Aditya Patel who were also big winners during the lap one dust-up. 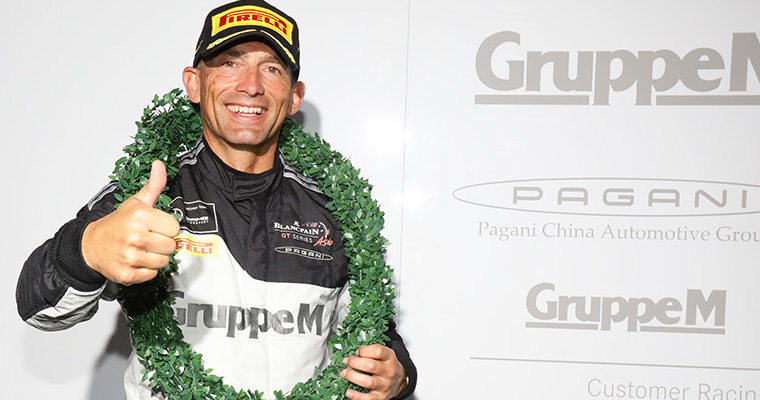 Reinhold Renger is the 2018 Blancpain GT Series Asia GT4 champion after the combination of victory and a penalty for his nearest championship rivals helped seal the crown with a race to spare.

GruppeM’s Mercedes-AMG initially driven by Ryuichirou Ohtsuka remained close to race leader Sunako Jukuchou throughout the opening stint fully aware that the BMW Team Studie M4 would spend an additional 15s in the pits. Renger therefore duly inherited a comfortable lead after the stops, while Team iRace.Win’s Ringo Chong and Alex Au also moved up one place to second at Takayuki Kinoshita and Jukuchou’s expense.

The late race Safety Car period initially threw Team Studie a lifeline. But when, during a post-race investigation, Kinoshita’s pass on Au was deemed to have taken place under yellow flags, there was no choice but to apply a 30s penalty in lieu of a drive-through. It also ensured that the Japanese pair ended the day 26 points behind Renger with only 25 available for victory tomorrow.

Nick Foster, #27 HubAuto Corsa Ferrari 488 GT3: “It’s a massive result for us. Obviously a few things went our way – avoiding the first corner mess was crucial and Jono also knew the Lamborghini would serve a longer pitstop, so I was always likely to inherit a handy lead. I wasn’t cruising out there but also didn’t do too much to stress the car. There was a bit more in the tank if we’d needed it at the final restart. Tomorrow the shoe’s on the other foot: FFF Racing and GruppeM won’t have a pitstop penalty whereas we’ll serve the maximum 15s. But who knows what can happen. We’re starting highest of the championship contenders and have two Pro/Am crews ahead of us on the grid.”

Reinhold Renger, #666 GruppeM Racing Mercedes-AMG GT4: “I’m really surprised to be stood here as champion with a day to spare! But it doesn’t detract from the achievement at all. An 18-point lead with 25 available would have made it very difficult for Team Studie regardless of the penalty. Changing co-drivers hasn’t made things easy this year – you’d always rather have one guy with you all season as even the simple things like seat and pedal positions can have an impact. But everyone has played their part in this success, and not least GruppeM who have been fantastic throughout 2018. A lot of the credit must go to them. The pressure’s off tomorrow when we can enjoy the final race of the season.”

Tomorrow’s championship decider begins at 10:55. Watch it live on the series’ Facebook page and website, On.cc in Hong Kong, and across China via the dedicated streaming services listed below. 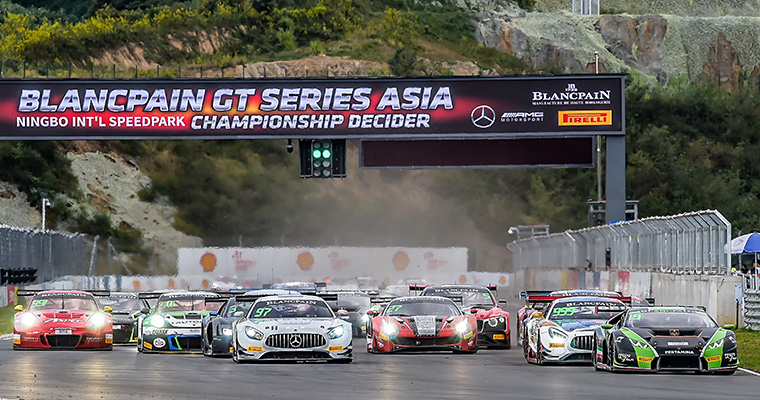