Padayachee and Tse scored their second Real-PRO and AM victories, respectively, in as many rounds, Laurenson converted pole position into a routine Sim-PRO win, and Rose became the first woman to claim an SRO Esports-sanctioned race by winning the Sim-AM class. 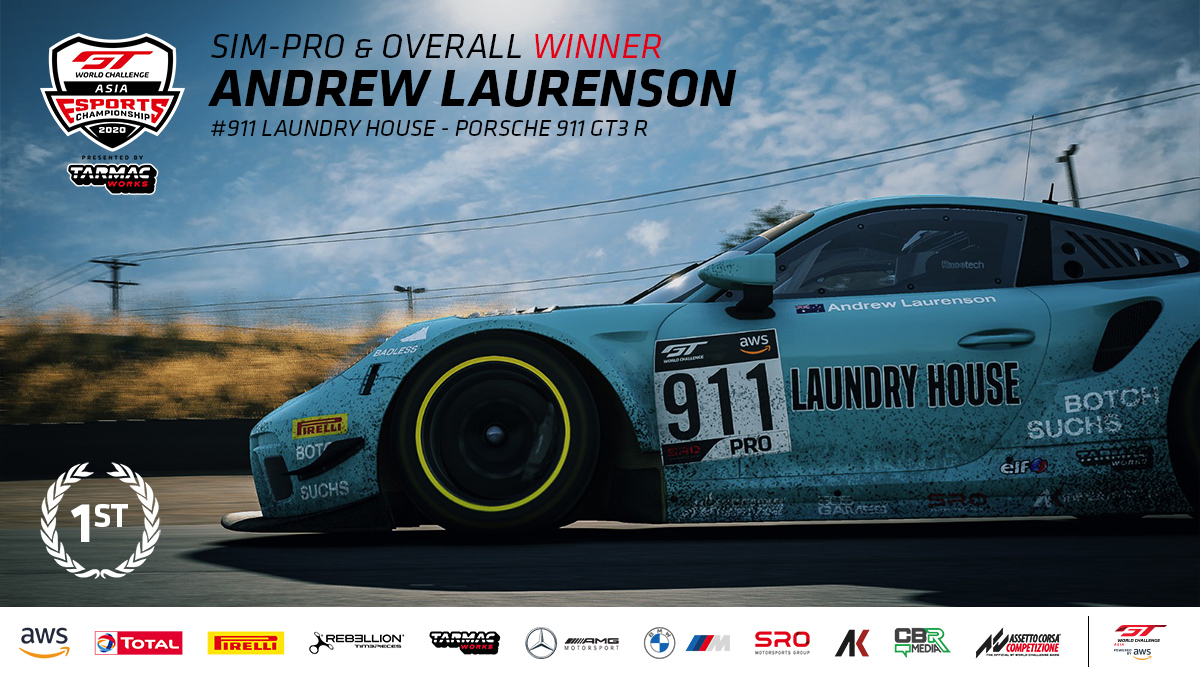 Andrew Laurenson took advantage of the chaos on lap one to run out a comfortable winner in the day’s opening 60-minute race. Yuki Shirakawa and Andika Rama Maulana completed the podium places just 0.2s apart while nine different manufacturers featured in the top-13.

Laurenson was never troubled en route to a six-second victory after his task was made easier by a Turn 1 pile-up triggered by Laundry House team-mate and erstwhile championship leader Karl Petersen spinning around another likely contender, Joseph De Jesus.

The subsequent mayhem resulted in 14 cars pitting at the end of lap one to fix damage during their mandatory stop while the top-four featuring Laurenson, Andrew O’Hara, Shirakawa and Maulana inherited a sizeable advantage.

Server issues accounted for O’Hara soon after, which left Laurenson free to pull clear of the battling Shirakawa and Maulana. The Australian had opened a 10s gap before pitting and duly stroked it home to give the Laundry House team its second overall Sim victory of the season.

Shirakawa and Maulana’s race-long battle continued right up until the chequered flag where the Ferrari just held on to second place ahead of the Mercedes-AMG.

Behind, Naquib Azlan made the most of the first corner chaos to come through from 15th to finish fourth. The Lexus did well to initially bridge the gap Maulana but dropped back after stopping later in the race.

Mia Rose also made serious inroads from her lowly 18th place on the grid to finish fifth overall and become the first woman to win an SRO Esports-sanctioned race. The Australian’s Sim-AM victory aboard a privately entered Aston Martin was built on sheer pace and some robust passing moves, including a particularly well executed late lunge that relieved Kin Long Li of fifth.

Li’s Wako’s Fliptable Racing Mercedes-AMG maintained its consistent start to the season with sixth, while Terry Rayton charged back up to seventh after stopping early to repair his Lamborghini which had been caught up in the lap one incident. 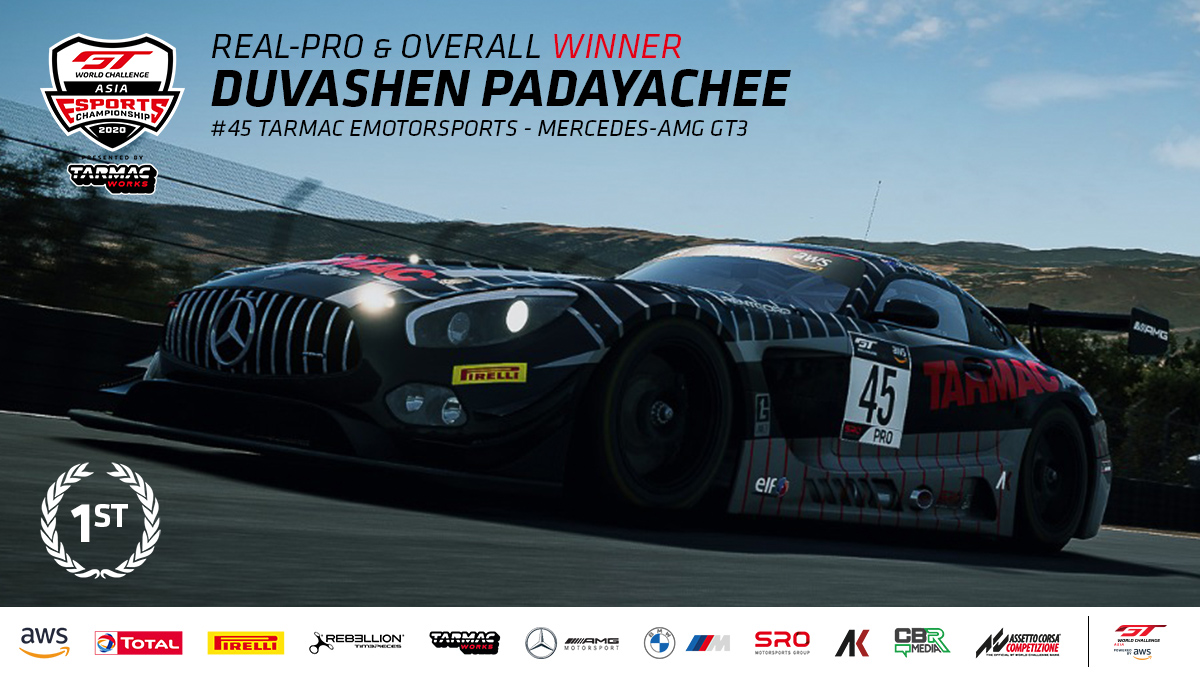 Another chaotic start and equally unpredictable finish helped Duvashen Padayachee climb from ninth on the grid to make it two wins in as many races at Laguna Seca.

Pole-sitter Aaron Borg was turned around by front row partner Evan Chen into Turn 1, while the same attempted move also accounted for Dominic Ang’s Porsche. Freddie Ang’s spin at The Corkscrew delayed another potential contender later on lap one before Chen, who’d inherited the lead, was hit with a 10s stop-go penalty for his part in the Turn 1 incident.

All of that left Matt Solomon – who’d started fifth – leading from Padayachee after Matthew Marsh also dropped out of the top-two in the first 20 minutes. Shaun Thong ran third ahead of a recovering Freddie Ang who’d prevailed in a lengthy scrap with Alister Yoong, while Melvin Moh was making up time lost to a drive-through penalty by taking sixth from Kang Ling.

But that would all change during an action-packed final 20 minutes featuring pitstops and on-track incidents.

Solomon looked odds-on to maintain his net lead after pitting but lost time on track before the stops had shaken out. That briefly left Ang in the box seat before a tangle with Yoong allowed Padayachee to slip past and into the lead once the late-stopping Shaun Thong visited the pits.

That wasn’t the end of the story, though. Stopping with two laps remaining dropped Thong behind Yoong and just ahead of the scrap involving Solomon, Moh and Ang, which then became fifth when the Audi driver out-braked himself at the final corner. The same confusion also caught out Solomon, which allowed Moh to make up two places as the race ticked on to the final lap.

Ahead, Yoong had been hit with a drive-through penalty for his part in the earlier incident with Ang, which left Solomon and Thong to fight over the remaining podium place behind breakaway leader Padayachee and Moh. However, the Mercedes-AMG and Audi would come to blows halfway around the final lap when Thong spun himself and the Mercedes-AMG.

Thus Padayachee took the chequered flag 3.3s ahead of Yoong, whose drive-through converted to a 30s post-race penalty dropped the Lexus to seventh. That elevated Moh and Ang to the final podium spots, while early pitter Tengku Ley found himself fourth.

Thong recovered to finish fifth on the road but was handed a 30s post-race penalty for his part in the clash with Solomon, who inherited the place as a result. Yoong dropped to sixth in the amended result ahead of James Russell’s Honda and Ling’s Lamborghini.

Alex Au and Kevin Tse enjoyed a race-long battle for Real-AM honours but it was the latter who ultimately prevailed to pick up another maximum score after also winning the class at Monza. Both also finished inside the overall top-10 as a result of Thong’s penalty and another issued to Evan Chen post-race. Billy Lo completed the Am class podium in 14th overall.

Next up is Silverstone where the championship reaches its halfway stage on November 10.