Following its opening round in Malaysia last month, Blancpain GT Series Asia heads north this weekend – and specifically to the Chang International Circuit in Thailand – for races three and four of the 2018 campaign (May 12/13).

A field of 30 supercars – 19 GT3s and record 11 GT4s – make the trip to Buriram’s 4.551km circuit where the title battles in both classes have already been blown wide open thanks to several driver reshuffles and the return of former race winners.

GruppeM Racing won both hour-long GT3 contests at Sepang en route to early leads in the Teams’ and Drivers’ standings. However, neither Brice Bosi or Raffaele Marciello – who claimed a victory and further podium last time out – will be in Thailand this weekend to defend their points’ advantage.

Instead, and as previously announced, it’s fellow Mercedes-AMG factory ace Maxi Buhk who fills in for his Pro counterpart while the Italian tackles the Nurburgring 24 Hours. The German helped GruppeM win at Buriram last season, and 12 months on he’s paired with the team’s new Am driver, Alexander Mattschull, who replaces Bosi. However, the #888 entry must still serve its 15s success penalty, incurred for winning at Sepang, during Buriram’s first race on Saturday.

GruppeM’s second, albeit Silver Cup-entered Mercedes-AMG suffered mixed fortunes at Sepang where Patric Niederhauser and Nico Bastian won Race 1 before picking up damage in the second. Just like its stablemate, the #999 entry also features a re-jigged driver line-up this weekend with Markus Pommer making the first of his four scheduled appearances in place of Bastian.

Niederhauser begins the weekend third in the standings, just one point behind FFF Racing Team by ACM’s fellow early pace-setters Martin Kodric and Dennis Lind. And with neither car hamstrung by a success penalty, a repeat of Sepang’s terrific Race 1 battle could be on the cards.

Josh Burdon starred in qualifying last time out to claim pole position, but his and Anthony Liu’s 10s success penalty for finishing second in Race 2 will undoubtedly harm their chances of repeating the feat on Saturday. Instead, it’s another of Absolute Racing’s three Audi crews – Silver Cup leaders Martin Rump and Franky Cheng – who could shine brightest thanks to their success penalty-free first race.

However, they and the rest of the Silver Cup challengers will have a new rival to contend with this weekend: reigning class champion Marchy Lee. The Hong Kong driver returns to Blancpain GT Series Asia at Buriram to partner Alex Yoong in a new-look Phoenix Racing Asia line-up. Lee, as well as former co-driver Shaun Thong, won the Silver Cup crown last season but starts this year’s assault 35 points behind Rump and Cheng, as well as 40 adrift of GT3’s overall leaders. How the grid’s oldest Silver Cup crew fair against their younger rivals should develop into an interesting subplot throughout 2018.

HubAuto Corsa’s Nick Foster and Leo Ye Hongli are best of the Ferrari drivers in fifth overall and third in Silver Cup courtesy of an ultra-consistent performance at Sepang. Another 488 GT3 won at Buriram last season, meaning this crew can’t be discounted either.

Elsewhere, both of KCMG’s Nissans looked competitive at Sepang, along with FFF Racing’s other Lamborghini. However, the likes of heavyweights OD Racing Team WRT and Craft-Bamboo-Racing will be eager to hit back in Thailand following low-key starts to their respective seasons.

In the Am Cup, business commitments for Arrows Racing and CMRT Eurasia’s drivers ensure only the championship’s top-two crews travel to Thailand where AMAC Motorsport’s Ben Porter and Andrew Macpherson will want to end Naoto Takeda and Takuya Shirasaka’s (KCMG) unbeaten start to the campaign.

The GT4 standings will also be affected this weekend following the withdrawal of GruppeM’s Russell Ward. The American and co-driver Reinhold Renger are currently joint top of the Drivers’ standings with Team iRace.Win’s Ringo Chong and Gilles Vannelet, who also claimed a victory and third place at Sepang.

Two crews also occupy third place: Craft-Bamboo Racing’s reigning champions Frank Yu and Jean-Marc Merlin, as well as BMW Team Studie’s Takayuki Kinoshita and Sunako Jukuchou, are 10 points shy of top-spot after both came away from the opening round with a podium.

Meanwhile Keo Chang, who won at Buriram last season along with Merlin/Yu, will be desperate to kick-start his campaign with a similar result.

The class’ eight full-season entries, which include Porsche, Mercedes-AMG, McLaren and BMW, are further bolstered in Buriram by three all-Thai Porsche Cayman GT4 Clubsport MRs. The total of 11 cars therefore represents an all-time record for the championship’s Am-only GT4 category. 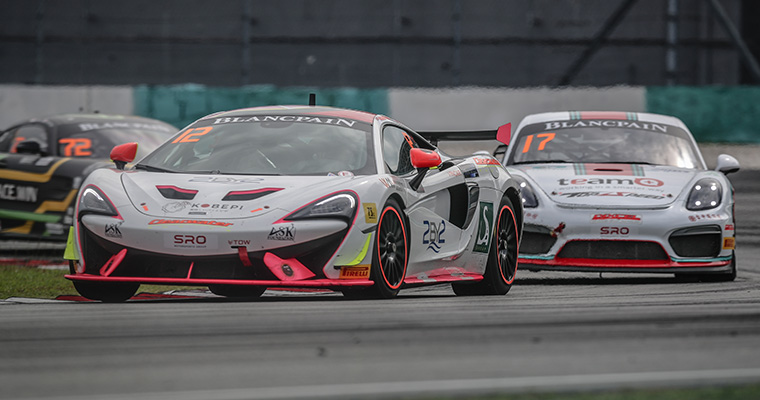