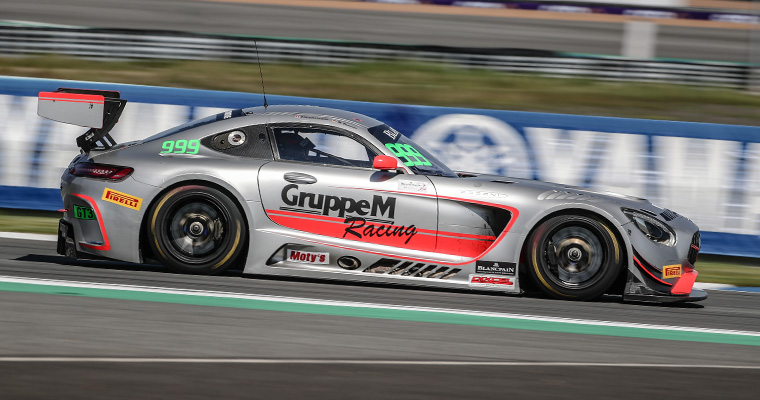 Niederhauser started from pole and, after negotiating a tricky first lap, was able to stretch his advantage to 3.5s before the pitstop window opened with 35 of the race’s 60 minutes remaining.

A particularly feisty first lap saw positions change throughout the top-six, but it was FFF Racing Team’s Dennis Lind who benefitted most after he jumped from fifth to second in the shake-up. HubAuto Corsa’s Leo Ye Hongli remained a constant threat in third, while KCMG’s Edoardo Liberati enjoyed a storming first stint to run nose-to-tail with second and third by the time the pit window opened.

Lind and Liberati’s positions came at the expense of Martin Rump whose attempts to move up from third on lap one actually resulted in the Estonian’s Absolute Racing Audi dropping to sixth at one point, although he was back up to fifth before the stops after passing Aditya Patel’s OD Racing R8 LMS GT3.

With none of the front-runners serving additional pitstop success penalties the order remained largely unchanged after the stops, albeit with Lind’s co-driver Martin Kodric now much closer to Pommer, who’d relieved Niederhauser aboard #999. The Lamborghini looked like the faster package and when the leading Mercedes-AMG was blocked by GT4 traffic, his Croatian pursuer pounced.

However, the moment was short-lived after Race Control handed the FFF Racing Lamborghini a one-second stop/go penalty for being under its minimum pitstop time.

That should have given Pommer a straightforward run to the chequered flag, but that was without factoring in Ye’s co-driver Nick Foster who, after reducing his arrears by half-a-second per lap post-pitstops, spent the final 10 minutes tucked up behind the leader without ever finding a place to pass. 1.4s covered them at the finish.

Third went to Absolute Racing’s Rump and Franky Cheng who profited from running a longer first stint and under-cutting their rivals, as well as Kodric/Lind’s penalty.

At least FFF Racing could celebrate winning the Pro/Am class. Hiroshi Hamaguchi started 11th overall but pitted in seventh after enjoying a good scrap with fellow Bronze-graded drivers Juwon Seo and Anthony Liu. The five-second success penalty he and co-driver Marco Mapelli incurred for finishing third at Sepang didn’t slow their progress after the stops, either, with the Italian holding off a recovering Kodric over the final laps to claim fourth overall.

Yuke Taniguchi and Tsugio Matsuda completed the top-six after picking up 10 places over the course of the hour-long race. Taniguchi started 16th but was running 11th when Matsuda climbed aboard and continued the KCMG Nissan’s charge through the field.

Mitch Gilbert and Patel’s OD Racing Audi and KCMG’s second Nissan driven by Liberati and Florian Strauss finished seventh and eighth after both lost ground during the second stint, while Andrew Kim and Adderly Fong finished four places ahead of where their Absolute Audi started. Team-mates Liu and Josh Burdon completed the top-10 after serving their additional 10s success penalty for finishing second at Sepang.

Alexander Mattschull and Maxi Buhk lined up fourth but were prevented from challenging by an early puncture and full 15s success penalty. Nevertheless, the pair still start tomorrow’s race from pole.

In the Am class, KCMG’s Takuya Shirasaka and Naoto Takeda maintained their 100% start to the season by beating AMAC Motorsport’s Ben Porter and Andrew Macpherson. 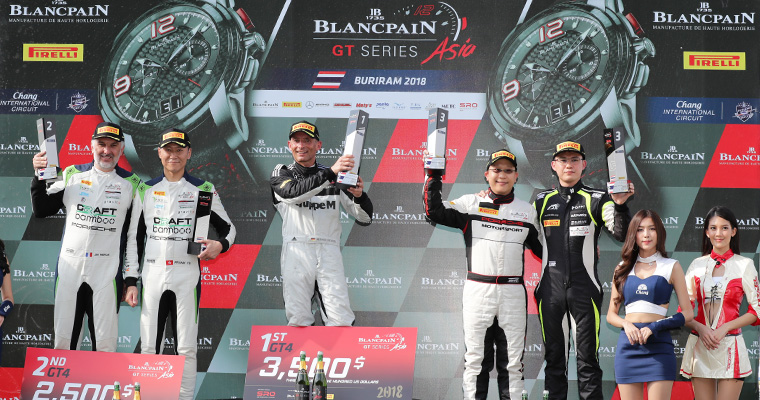 GruppeM Racing and BMW Team Studie enjoyed an eye-catching battle for the lead in the opening stint before Reinhold Renger emerged victorious from a race featuring multiple penalties and incidents.

Renger and pole-sitter Sunako Jukuchou soon pulled clear of the chasing pack before engaging in their own private battle that saw the lead change several times.

Renger – racing solo this weekend – emerged from the pitstops leading but spun away his advantage at Turn 1 soon after. Ordinarily Jukuchou’s co-driver Takayuki Kinoshita would have benefitted, but a penalty for a Full Course Yellow infringement in the first stint resulted in a drive-through penalty that handed Renger a lead he wouldn’t relinquish.

Markus Pommer, #999 GruppeM Racing Mercedes-AMG GT3: “It was actually quite tough because our pitstop wasn’t perfect: another car was in front of us, so I lost maybe two seconds trying to get around it when I left the pits. Then I had to push like hell! Lapping the GT4 traffic was difficult, and I actually had a moment where I nearly crashed, which is how the Lambo got past. But then the team confirmed he had a penalty so I relaxed. After that I made sure not to make any mistakes and bring it home.”

Reinhold Renger, #666 GruppeM Racing Mercedes-AMG GT4: “I tell you, it was a hard race with a lot of things going on! But we got a bit lucky. It was a double stint for me, which means we have to serve a penalty, but I was able to manage it despite the conditions - it’s very warm inside the car. The class is very strong and I had to push from start to finish, including a little mistake. Strength-wise it’s definitely better to share the car with someone because you are fresher and can push harder, but I managed it.”