Ferrari scored its first Blancpain GT Series Asia victory of the season in the weekend’s opening race at Shanghai earlier today thanks to HubAuto Corsa duo Nick Foster and Jono Lester. The duo scored theirs and the team’s maiden win by a comfortable 13.5s from leading Pro/Am crew Anthony Liu and Alessio Picariello, while Andrew Kim and Adderly Fong made it a double Absolute Racing Audi podium.

A frenetic first corner laid the foundations for an unexpected result that saw championship leader Patric Niederhauser tumble down the order while avoiding Franky Cheng’s Audi, which was tagged into a spin by Dennis Lind.

An unrelated incident featuring Shaun Thong and Yuke Taniguchi also necessitated a early Safety Car period, but when racing resumed in anger after 16 minutes it wasn’t long before Lester – up to second after starting fifth – inherited the lead as a result of Lind serving a drive-through penalty. There the Ferrari remained for the rest of the race, save for a few laps during the pit window, after both the Kiwi and then Foster eased clear of the chasing pack.

That same pack was headed pre-pitstops by Craft-Bamboo’s Darryl O’Young who benefitted most from the Turn 1 shake-up by vaulting from 10th to second. Lind’s penalty ensured the Porsche re-inherited the positon after Lester muscled past just before the Safety Car period, and remained there until just before the pitstops when KCMG’s Edoardo Liberati nipped through.

With Foster inheriting a healthy lead from Lester, all eyes were on who would emerge in second. Absolute’s Anthony Liu had been fifth but an early pitstop gave his Pro driver Alessio Picariello a precious few laps head-start on the other contenders, which ultimately paid dividends. Indeed, Liberati’s co-driver Florian Strauss emerged just ahead of the Audi but was unable to maintain second on colder tyres.

While Picariello edged clear, the Nissan had soon fallen into the clutches of O’Young’s replacement, Aidan Read. The pair ran closely for some time before a committed move along the back straight helped the Porsche to draft past. Adderly Fong, who’d benefited from the scrap, followed suit soon after before also relieving Read of the final podium place.

Further back, Marco Mapelli was on the move aboard his FFF Racing Team Lamborghini. Fastest lap of the race helped the Italian pick up several places over the final 20 minutes, including that of Read’s fourth position, en route to making it three Pro/Am crews in the overall top-four.

Read, spurred on by the huge home crowd supporting Craft-Bamboo’s Shang Peng Gao Ke sponsors, gave the packed front grandstand something to celebrate by finishing fifth ahead of Strauss, who resisted late pressure from Lind’s recovering co-driver, Martin Kodric. Aditya Patel was right behind them in the OD Racing Team WRT Audi he shares with Mitch Gilbert.

Shae Davies started 22nd but finished ninth alongside Sandy Stuvik in the second of Craft-Bamboo’s Porsches while championship leader Niederhauser and his co-driver Nico Bastian salvaged a point for 10th after their first lap drama.

The Japanese duo had won three of the previous four races prior to Shanghai and led the opening stint from Brian Lee’s TTR Team SARD Porsche after Kinoshita started from pole. But the Safety Car left little time to build an advantage that might have negated the pair’s 15s success penalty, which gave Renger and his GruppeM co-driver Rick Yoon a chance to jump ahead after the stops.

Team iRace.Win’s Ringo Chong and Alex Au both felt they could have challenged without a slow pitstop but still completed the podium ahead of Lee and Brian Tong’s Porsche. Team Studie’s second BMW rounded out the top-five.

The weekend’s second race gets underway at 13:00 (GMT +8) tomorrow. Watch it live on the championship’s website and Facebook page, On.cc in Hong Kong and China’s online streaming platforms listed below.

Nick Foster, #27 HubAuto Corsa Ferrari 488 GT3: “It’s testament to this guy [Jono Lester] – his opening stint was brilliant! He started way down the pack and he came out of nowhere, like a phoenix from the ashes! To be honest we’ve struggled all weekend so this has come as a massive surprise. We threw the kitchen sink at that race and the kitchen sink drives beautiful!”

Reinhold Renger, #666 GruppeM Racing Mercedes-AMG GT3: “It’s really good to be back on the podium again after Fuji where we were really unlucky, actually. We knew the performance and potential was still there and that we needed to regather at Shanghai. It’s never easy to step in at the last minute like Rick has done this weekend. He drove based on the situation, which gave me a chance to take points from Team Studie and Ringo.” 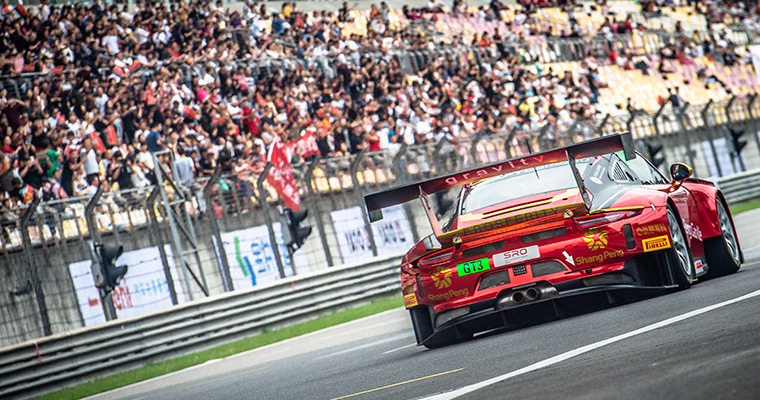