Ningbo International Speedpark in south-eastern China plays host to the Blancpain GT Series Asia season finale this weekend (October 13/14) when a total of five championship titles will be decided.

27 supercars – a number restricted by organisers due to available garage and track space – will battle around the 23-turn, 4.015-kilometre circuit, which staged its first event less than 12 months ago. Up for grabs are the GT3 Overall Drivers’ and Teams’ titles, as well as Pro/Am, Silver Cup and GT4.

This year’s unpredictable title fight took another twist at Shanghai three weeks ago when Martin Kodric and Dennis Lind reclaimed the lead from Patric Niederhauser by winning for the second time in 2018. FFF Racing Team’s #19 line-up, who now lead their GruppeM Racing rival by 12 points, also head a cast of seven crews capable of winning the overall crown this weekend when victory in both 60-minute races would result in the maximum 50 points.

It’s a handy head start, which is just as well given that Kodric and Lind must serve a 15s pitstop success penalty during Race 1 for winning at Shanghai. That handicap should therefore initially play into the hands of Niederhauser who, along with co-driver Nico Bastian, contests Saturday’s race penalty-free.

Eight points further back is Nick Foster who, realistically if not mathematically, remains the only other credible overall championship contender. The HubAuto Corsa Ferrari he shares with Jono Lester battled its way back into title contention by claiming victory in Shanghai’s first race. And, just like Niederhauser, the Australian won’t have to worry about a pitstop success penalty on Saturday.

Behind the top-three come four crews who must win both races to stand any chance of snatching the crown. Pro/Am championship leaders Hiroshi Hamaguchi and Marco Mapelli fell just short of their maiden Blancpain GT Series Asia victory in Shanghai after finishing second to team-mates Kodric and Lind, while KCMG’s Florian Strauss and Edoardo Liberati (Nissan) are only one point further back in fifth. The best-placed Audi shared by Absolute Racing’s Franky Cheng and Martin Rump is also in the hunt but represents a more likely Silver Cup challenger, while the European Blancpain GT Series’ newly crowned Overall and Endurance Cup champion Raffaele Marciello could yet add an Asian title to his 2018 trophy haul.

Winning both races might seem unlikely, and especially when considering pitstop success penalties, but it has been achieved once before. Indeed, it was at the championship’s 2017 season finale that Aditya Patel and Mitch Gilbert became the first and, so far, only crew to achieve the feat en route to second in the final standings.

Pro/Am also features several potential champions but it’s Hamaguchi and Mapelli who arrive at Ningbo in the box seat thanks to their 10-point advantage over KCMG’s erstwhile class frontrunner, Yuke Taniguchi. Marciello is another seven points behind, while Anthony Liu must bridge a 40-point deficit if he’s to overhaul the current class-leading Lamborghini.

In the Silver Cup, 29 points covers the five crews that could yet win the class title at Ningbo. Lind and Kodric predictably top the standings, but only by eight points from Foster, while Niederhauser, Rump/Cheng and Liberati/Strauss are also potential champions in waiting.

The Teams’ Championship will also be decided this weekend when reigning champions GruppeM go head-to-head with FFF Racing. Just seven points separate the top-two with a maximum of 86 available for finishing first and second in both races. The Mercedes-AMG and Lamborghini squads could mathematically be caught by KCMG (Nissan) and Absolute Racing (Audi), although their respective 68 and 80-point deficits make that unlikely. 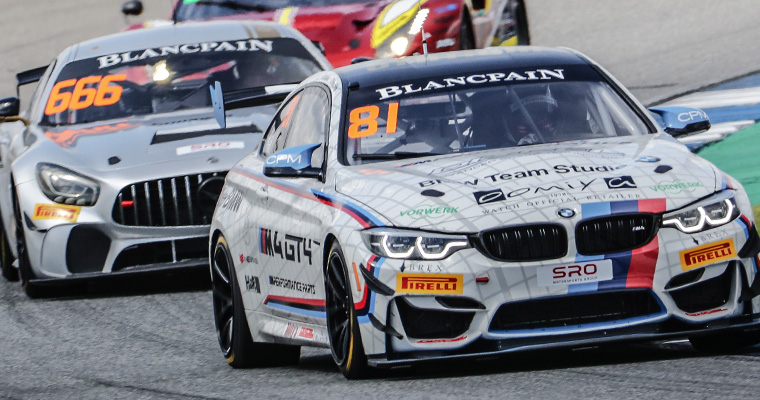 Reinhold Renger heads to Ningbo’s season finale this weekend in the same position he’s occupied since the start of the year: first. However, the Mercedes-AMG driver’s advantage has never looked more precarious following another strong outing by BMW Team Studie’s Takayuki Kinoshita and Sunako Jukuchou.

The two crews are separated by 11 points after the Japanese duo carved another 18 from their GruppeM rival’s lead three weeks ago. Indeed, following a slow start, Kinoshita and Jukuchou have scored 93 of the possible 100 points available over the last four races. Contrast that with Renger’s 39 and you understand how the #81 M4 GT4 has emerged as a genuine threat.

And yet Renger could still seal the title with a race to spare this Saturday by finishing as low as third. The 15 points available for doing so, coupled with the BMW non-scoring, would be enough for the Mercedes-AMG driver to amass a 26-point lead with only 25 remaining.

Kinoshita and Jukuchou’s 15s success penalty for winning Race 2 at Shanghai further reduces their chances of beating Renger, who competes handicap-free, on Saturday.

Team iRace.Win’s Ringo Chong also heads to Ningbo as a championship protagonist but must reduce his current 25-point deficit by beating Renger on Saturday to have any chance come Sunday. He’s again partnered by Alex Au this weekend after the Hong Kong driver first joined the squad at Shanghai.

Elsewhere, Craft-Bamboo Racing’s Naomi Zhang and Diana Rosario will become the first all-female crew ever to contest a Blancpain GT Series Asia round when they team up aboard AMG Driving Academy Team LSH Motorsport’s GT4 entry.