Solite Indigo Racing’s MG Choi heads to round three with a 10-point championship lead over home favourite Yuya Sakamoto, while erstwhile leaders Tanart Sathienthirakul and Philip Hamprecht slipped to third during the previous outing in Thailand.

However, with 50 points available across two hour-long races, the title race could be turned on its head before the series reconvenes at Fuji two weeks later.

Japan’s Grand Prix venue is rightly considered one of the world’s great race tracks thanks to iconic corners like 130R, Esses, Spoon and Degner Curves. 22 GT3 entries will hope to tame them this weekend when Blancpain GT World Challenge Asia rolls into town.

Speed and consistency are both required at Suzuka, and that’s exactly what MG Choi has brought to this year’s opening two rounds. The Korean claimed his and Indigo Racing’s maiden victory last time out at Buriram and is yet to finish lower than fifth despite having two different co-drivers for the first four races. That theme continues in Japan where he’s joined in the #97 Mercedes-AMG by Patric Niederhauser who scored three wins en route to third in last year’s Drivers’ Championship.

Yuya Sakamoto lies second in the standings despite also switching co-drivers at Buriram where he and Andre Heimgartner racked up 30 points across the weekend. However, second place in Race 2 ensures their HubAuto Corsa Ferrari must serve a 10s Pitstop Success Penalty on Saturday. But that potential setback could be negated by the team and car’s proven speed at Suzuka where the combination claimed pole position 12 months ago and at the subsequent 10 Hours.

HubAuto are joined on the Success Penalty list by Panther/AAS Motorsport’s Vutthikorn Inthraphuvasak and Alex Imperatori who picked up the full 15s handicap for winning Buriram’s second race. Their Porsche’s rapid pace in both Thailand and Malaysia suggests the Pro/Am contenders will play a leading role again at Suzuka.

The Thai-Swiss duo head to Japan just three points adrift of Porsche’s best placed entry: Absolute Racing’s Sathienthirakul and Hamprecht. A tougher second race in Thailand saw them drop 15 points behind Choi, although they – like the Korean – compete Success Penalty-free on Saturday.

Elsewhere, Martin Rump and Weiron Tan are Audi’s best-placed crew in eighth overall. Absolute Racing’s #12 R8 LMS GT3 has shown plenty of pace this year but only scored points on two occasions. Perhaps its luck will change at Suzuka where the team and Rump scored victory 12 months ago.

Other crews to look out for include TSRT’s David Chen and Andre Couto who finished third in Buriram, and Australian Supercars star Shane van Gisbergen who makes his Triple Eight Racing debut alongside Jefri Ibrahim.

Meanwhile, Alex Au and Frederik Schandorff head to Japan as the Pro/Am championship leaders thanks to an incredibly consistent run. VSR’s Lamborghini crew is five points ahead of Inthraphuvasak/Imperatori and another 12 clear of the Singha Plan B Audi shared by Bhurit Bhirombhakdi and Kantasak Kusiri.

Takayuki Kinoshita and Sunako Jukuchou head back to the scene of their maiden series victories this weekend eager to extend their championship lead. BMW Team Studie’s Japanese duo are 23 points clear of Frank Yu and Jean Marc Merlin who are the only pairing to have beaten the M4 this year.

Kinoshita and Jukuchou have every right to feel confident on home soil but their 15s Success Penalty will make things tricky in Race 1. Their closest championship challengers Yu/Merlin and Brian Lee/Tony Fong will also be handicapped, which passes the advantage to Team iRace.Win’s Ringo Chong and Setiawan Santoso who lie fourth in the standings.

Nevertheless, GTO Racing with TTR’s Lee and Fong looked especially impressive in Thailand where they just missed out on a first Blancpain GT World Challenge Asia victory. And with GTO competing on home soil this weekend, there’s every chance that breakthrough win could come at Suzuka.

Audi and Absolute Racing also make their GT4 debuts in Japan where Audi R8 LMS Cup rivals Anderson Tanoto and Mark Williamson team up for their maiden championship outings. The car is already a proven winner in Europe and America, while Absolute know the championship inside out. Expect it to run the BMW and Mercedes-AMGs very close.

Mercedes-AMG moved further clear of rivals Ferrari during America’s latest round at Sonoma last weekend. The German manufacturer now has 5375 points compared with the Italian marque’s 3677.

Ferrari has elected to change one of its scoring drivers in Asia where Andre Heimgartner is now nominated as its ‘Young Wolf’. Each manufacturer is permitted one change per region during the season. 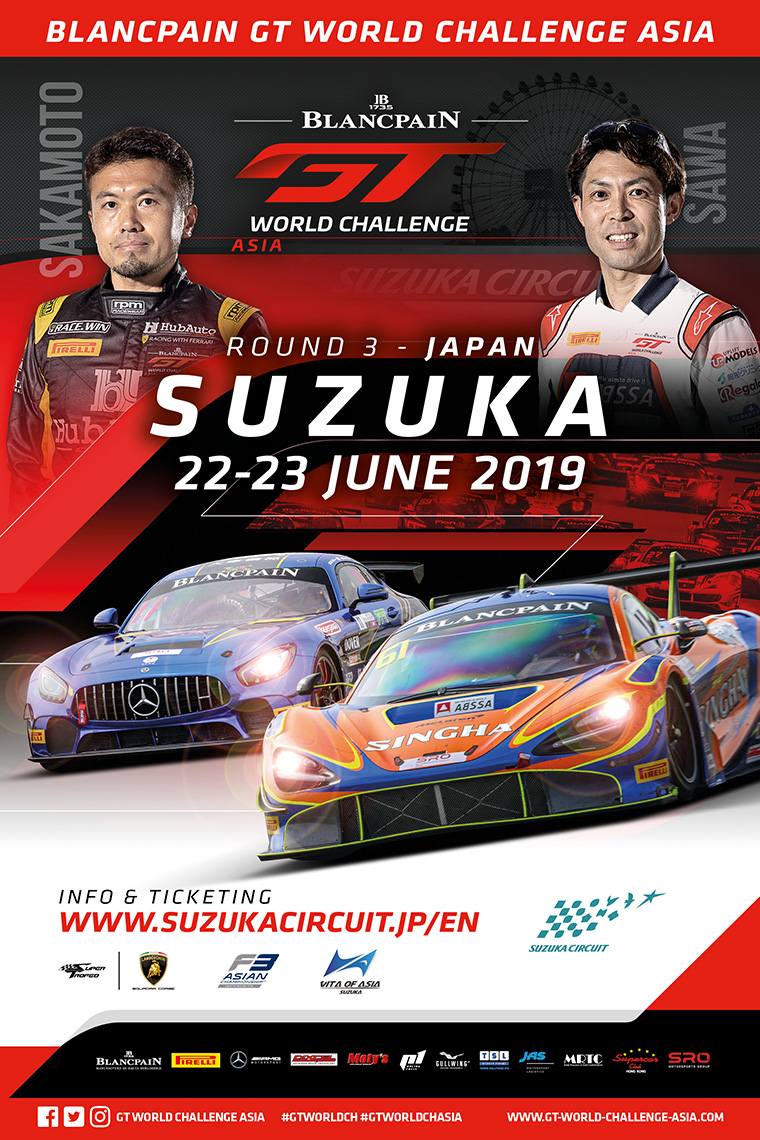