Absolute Racing has made the perfect start to its Blancpain GT World Challenge Asia campaign by claiming pole positions for both of this weekend’s races after its #912 Porsche shared by Yuan Bo and Dennis Olsen set the fastest times in both 15-minute qualifying sessions earlier today.

However, the qualifying pace of its Bronze-graded amateur compared with the established Silvers, plus a close examination of the driver’s performance throughout practice, has prompted the SRO Sporting Panel to exceptionally add 35 seconds to the #912 Porsche’s Race 1 and 2 minimum pitstop times in accordance with Article 1.6.5.

It was Absolute Racing’s #911 entry driven by Tanart Sathienthirakul that initially led the opening session before Vutthikorn Inthraphuvasak jumped ahead. However, the Panther/AAS Motorsports driver’s time at the top was short-lived after his Thai compatriot then lapped 0.161s faster.

Bo was at that point fourth behind Weiron Tan but made his move with three minutes remaining by lapping in 2m04.883s. That was 0.166s faster than the best-placed Silver-graded driver, Sathienthirakul, whose time was good enough to secure Absolute Racing’s Porsches a front row lock-out.

Meanwhile, BMW Team Studie and Sunako Jukuchou stated their intent by claiming a commanding GT4 pole position. The Japanese driver’s 2m17.309s was the class’ fastest of the weekend so far.

It was once again all about Absolute Racing’s #912 Porsche in GT3’s second 15-minute session, although only after a red flag period hindered the progress of others.

Jaafar jumped ahead of Rump after the session resumed with eight minutes remaining, but was quickly pushed back to second by Olsen’s 2m03.934s. The Triple Eight Mercedes-AMG was unable to respond and fell further down the order when Panther/AAS Motorsport’s Alex Imperatori and Mathias Beche locked out the first three places for Porsche in the closing stages. Imperatori finished 0.180s behind Olsen and just 0.094s ahead of the Modena Motorsports entry.

Elsewhere, AMAC Motorsport’s Ben Porter was fastest of the five-car Am Cup field.

GT4 honours were once again taken by BMW Team Studie who made it two from two courtesy of Takayuki Kinoshita. The Japanese driver was five tenths shy of team-mate Jukuchou’s Q1 time but still 1.6s clear of Ringo Chong’s Team iRace.Win Mercedes-AMG.

The weekend’s first 60-minute race starts at 16:15 today. Watch it live on the championship’s website and Facebook page, SRO’s GT World Youtube channel, and across China on Youku, SMG, Douyu and Huya. 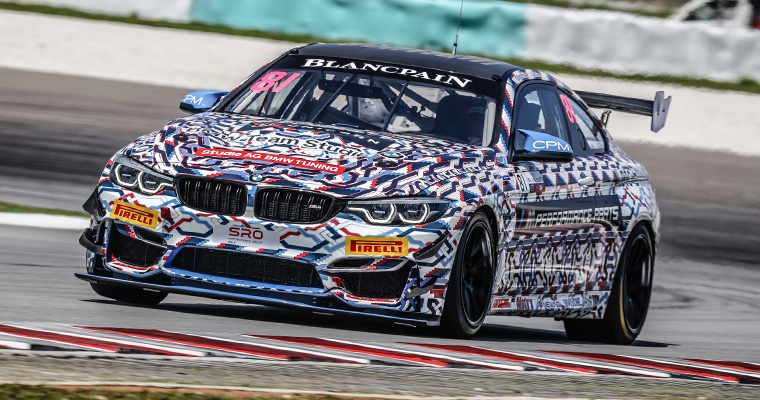