The Malaysian’s late dive down the inside into Turn 1 topped an action packed final 10 minutes reminiscent of Suzuka’s second race two weeks ago when a similar Safety Car period also brought Pros and Ams together over the closing stages.

The Panther/AAS Motorsports Porsche Inthraphuvasak shares with Alex Imperatori took the Pro/Am spoils in second, while Craft-Bamboo’s Christina Nielsen and Darryl O’Young prevailed in a frenetic late scrap for the final podium spot.

Further back, BMW Team Studie’s Sunako Jukuchou and Takayuki Kinoshita extended their GT4 championship lead with victory ahead of iRace.Win’s Mercedes-AMGs. Joe Chi and Keo Chang got the better of team-mates Ringo Chong and Setiawan Santoso, while yesterday’s winners – Jean-Marc Merlin and David Pun – lost ground due to a problem in the pits. 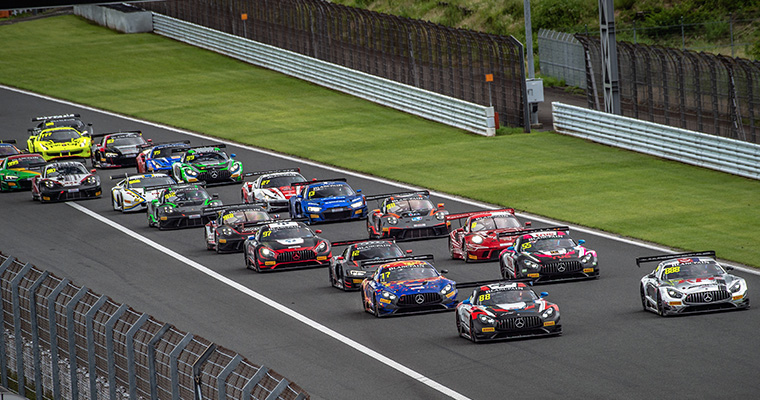 Victory, by 0.742s, was long overdue for Weiron Tan and Martin Rump whose bad luck has been a factor of the season so far. A podium in yesterday’s race suggested the tide was turning, and Absolute’s duo proved it by overcoming a 10s Pitstop Success Penalty in today’s 60-minute contest to announce themselves as championship outsiders.

The opening stint belonged to Mercedes-AMG whose entries filled the top-four positions before the pit window opened. Alessio Picariello led away from pole in the best of Craft-Bamboo’s entries while, behind, Naoki Yokomizo moved up to second after bumping Triple Eight’s Jazeman Jaafar out the way.

Picariello’s pace meant he was 11s up the road once the pitstops began after 25 minutes, although some of that advantage was due to Jaafar remaining bottled up behind Anstone’s Mercedes-AMG. That also allowed Melvin Moh to remain a close fourth, while Rump’s Audi lurked in fifth.

Absolute were the first frontrunners to pit and naturally slipped down the order as a result of their longer mandated pitstop. However, the Audi had also been the leading Silver Cup entry before the stops, offering hope that Tan could exploit his natural speed advantage against amateurs Jeffrey Lee, Jefri Ibrahim, Xu Wei and Daniel Au who ran first-to-fourth once the window closed.

At first their advantage seemed insurmountable. Picariello’s co-driver Lee was almost 10s clear of Triple Eight’s Ibrahim, while Vutthikorn Inthraphuvasak – whose co-driver Alex Imperatori pitted from sixth after starting ninth – was closing in on both of them after passing Wei and Au soon after the stops.

Then, with 15 minutes remaining, a Safety Car was called while marshals dealt with T2 Motorsports’ stranded Ferrari. When racing resumed, Tan was at the tail of a five-car train covered by just a handful of seconds.

Within two laps he was up to second and chasing down Inthraphuvasak, who passed Lee soon after the restart. The Porsche and Audi then spent the next five minutes nose-to-tail as Tan waited for his moment. It came at the start of the final tour when the Malaysian darted to his right and down the inside into the heavy braking zone for Turn 1. Inthraphuvasak cut back on the exit and ran side-by-side with the R8 through Turn 2 before Tan finally completed the race-winning move.

Behind, the late Safety Car had brought more Silver Cup entries into play, and it was one of those – Craft-Bamboo’s Darryl O’Young and Christina Nielsen – who ultimately finished third. The latter first avoided the contact between Anstone’s Wei and HubAuto Corsa’s Marco Seefried that accounted for both the Mercedes-AMG and Ferrari before passing Ibrahim and taking advantage of Lee’s drive-through penalty for multiple track limits infringements.

Likewise TSRT’s David Chen who finished fourth after the Audi he shares with Rahel Frey started 17th and pitted 14th. Ibrahim held on to finish second of the Pro/Am runners and fifth overall after outpacing Alex Au’s VSR Lamborghini over the closing laps.

Behind, the overall championship’s top-two underlined the unpredictability of today’s race by somehow finishing seventh and eighth despite serving unscheduled pitstops and time penalties. Both were involved in the same lap one incident that resulted in Manuel Metzger being spun to the back and Philip Hamprecht picking up a puncture. While the latter and his Absolute co-driver Tanart Sathienthirakul fought back to finish seventh without further issues, the Solite Indigo Racing Mercedes-AMG had to overcome a 15s Pitstop Success Penalty for winning yesterday’s race and another stop/go penalty incurred for a short pitstop. Somehow, Metzger and MG Choi finished eighth.

Both ARN Racing and ABSSA Motorsport will also wonder what might have been without their delays. Hiroaki Nagai and Yuta Kamimura came home ninth despite a drive-through penalty, while a late puncture forced the McLaren Piti Bhirombhakdi shares with Keita Sawa to pit under the Safety Car. They completed the top-10.

The Vattana Motorsport Lamborghini of Chonsawat Asavahame and Akihiro Asai won the Am Cup class by 2.5s from Kei Nakanishi and Shigekazu Wakisaka’s LM Corsa Porsche after a race-long battle that also featured Ben Porter and Andrew Macpherson, who completed the podium.

Just six points now separate championship leaders Sathienthirakul and Hamprecht from Choi, while Sakamoto – who failed to score today as a result of Seefried’s puncture – is another eight behind. Inthraphuvasak and Rump/Tan are fourth and fifth, 17 and 26 points adrift of top spot, respectively. 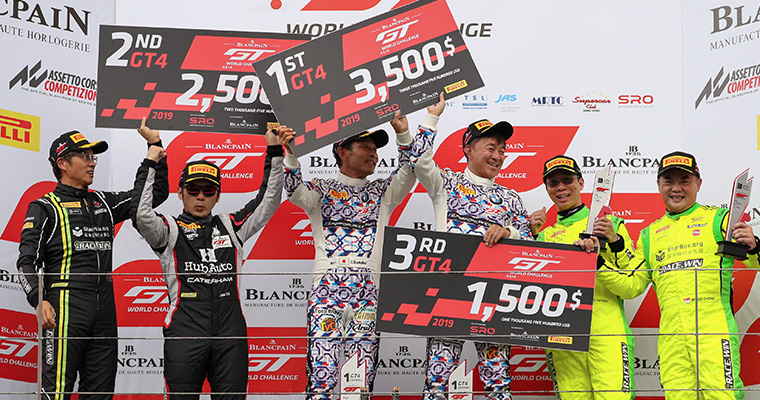 BMW Team Studie’s Sunako Jukuchou and Takayuki Kinoshita made the most of Craft-Bamboo’s pitstop problem to increase their lead at the top of the championship with victory at Fuji.

Jukuchou and yesterday’s winner David Pun enjoyed a fantastic scrap during the opening stint after the Mercedes-AMG driver passed his BMW rival at the start. However, the Japanese was back ahead before the pit window opened after racing side-by-side on several occasions.

The BMW’s 10s Success Penalty was five shorter than that of Craft-Bamboo, who won yesterday’s race. And although that undoubtedly handed the advantage to Team Studie, they were helped by the Mercedes-AMG refusing to restart after Jean-Marc Merlin replaced Pun.

Kinoshita negotiated the Safety Car period without issue to come home 2.6s ahead of Team iRace.Win’s Keo Chang and Joe Chi who occupied third throughout the opening stint, while team-mates Ringo Chong and Setiawan Santoso added a second podium to their weekend haul after serving an extra five seconds in the pits.

GTO Racing with TTR finished fourth ahead of Craft-Bamboo, which lost an additional 20s while trying to restart its Mercedes-AMG.