The second 60-minute encounter for real-world drivers was far more chaotic but produced a clear-cut winner in Padayachee (Tarmac Emotorsports) who delivered a fault-free performance to beat Craft-Bamboo’s JiaTong Liang by 32s. Shaun Thong (Excape Racing) completed the podium while Kevin Tse (Craft-Bamboo) took the AM spoils in eighth overall. 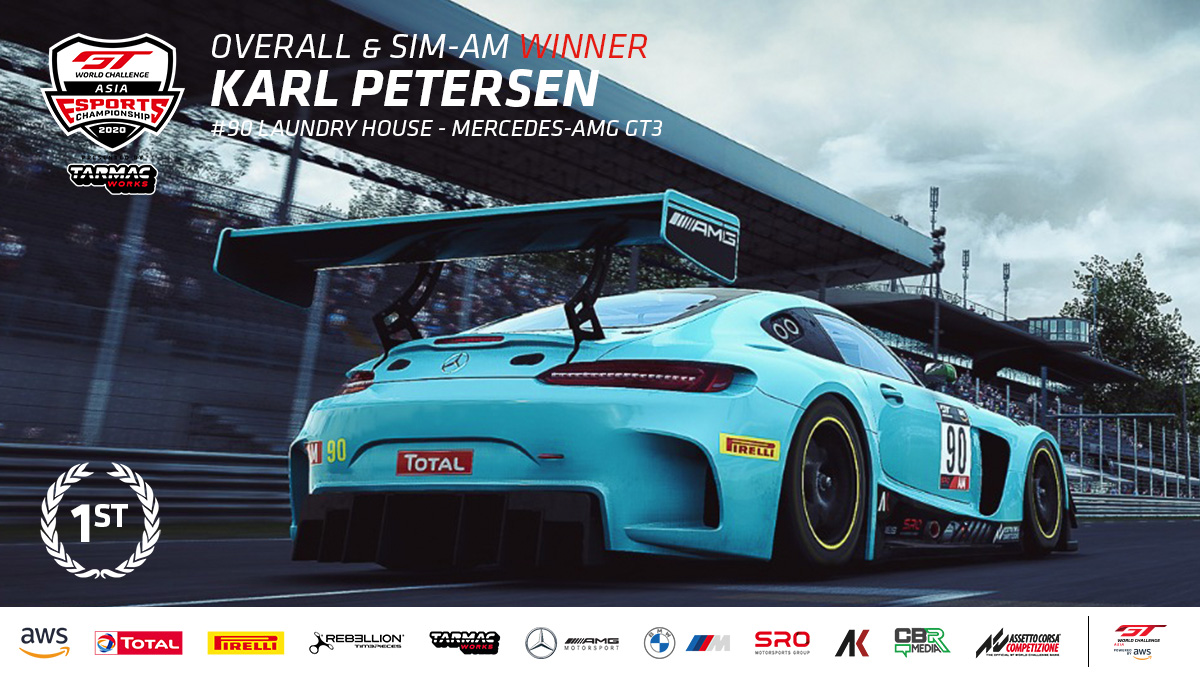 In truth, any one of the top-three could have won today’s Sim-PRO & AM contest. But, as it was, consistency and a slice of late-race luck proved key to Karl Petersen’s overall and AM victory.

De Jesus picked up where he’d left off in Suzuka’s non-championship Charity Cup race by claiming pole position from Kin Long Li and Charles Theseira whose attempted pass at Variante della Roggia allowed O’Hara to slip past and into second on lap one.

The opening stint continued with De Jesus slowly but surely inching clear of Laundry House’s BMW, which in turn broke free of Li who was coming under increasing pressure from Laurenson and Petersen. Neither could find a way past before the Wako’s Fliptable Racing Mercedes-AMG made its mandatory splash and dash fuel stop on the half-hour mark.

By contrast De Jesus, who pitted not long after with an 8s advantage over O’Hara, opted for 70 litres of fuel. But the additional time was compounded by missing his pitstop marks, which saw the Tarmac Emotorsports Mercedes-AMG slot back in between Li and Laurenson. The latter’s subsequent drive-through penalty left De Jesus to pester a resolute Li while the pair were held up in traffic.

All of that was playing nicely into the hands of O’Hara and Petersen who both ran longer first stints. And the upshot was a Laundry House one-two after the turquoise BMW and Mercedes-AMG served their pitstops.

O’Hara’s five-second lead should have been enough to claim victory. But with 10 minutes left on the clock he was clattered by a backmarker while approaching the Rettifilo, which allowed Petersen to nip through and into an unassailable lead.

De Jesus, meanwhile, had finally got the better of Li after several laps of taking and losing third place. But he wasn’t close enough to also take advantage of O’Hara’s misfortune and had to settle for the final podium spot, as well as Sim-PRO class victory.

Li’s deteriorating pace also allowed Fadhli Rachmat past before the chequered flag, while Philippa Boquida came through from 10th on the grid to complete the top-six in her privately entered McLaren – one of only two non-Mercedes-AMGs amongst the first half-dozen finishers. 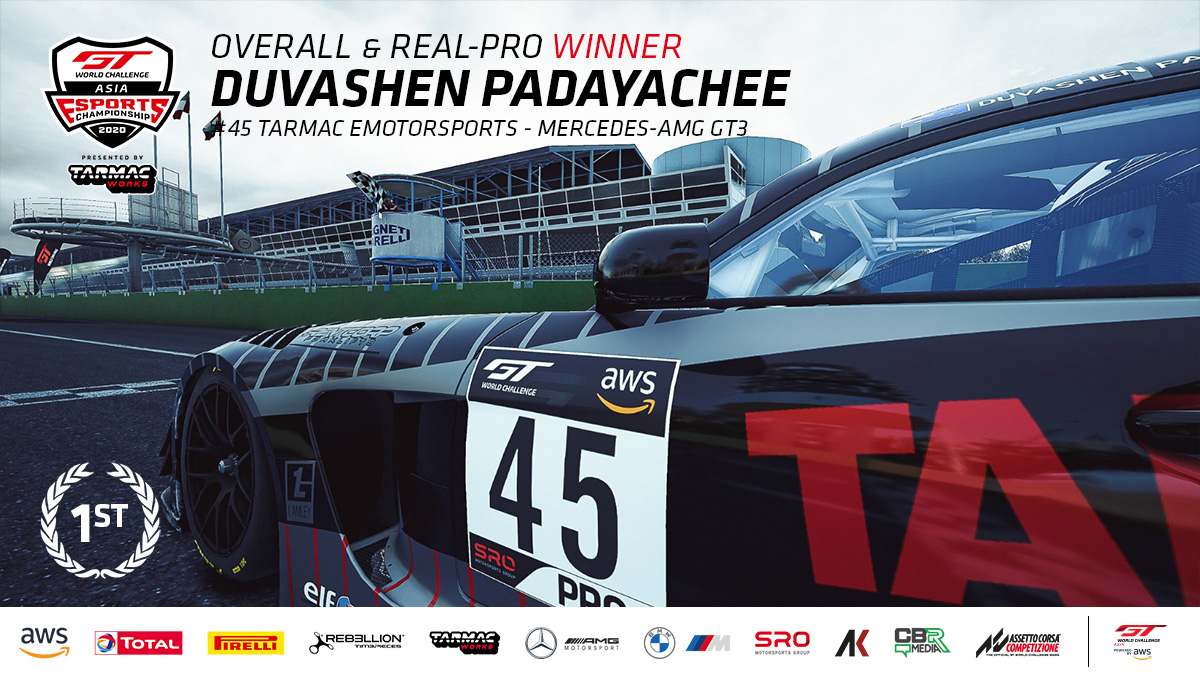 Duvashen Padayachee survived a chaotic start to claim a comfortable Real race victory at Monza ahead of JiaTong Liang and Shaun Thong.

Kang Ling’s qualifying pace marked him out as a pre-race favourite but the pole-sitting Lamborghini was one of many first-corner casualties that lost several positions, endured compromised race pace or retired altogether.

Instead, it was Liang – up from sixth on the grid - who initially led the fourth place-starting Padayachee and front row occupant Melvin Moh. However, the Craft Bamboo driver’s time at the front lasted less than eight minutes before the Tarmac Emotorsports Mercedes-AMG slipped down the inside at Turn 1.

From there Padayachee serenely went about his business. Indeed, a near-10s advantage before his mandatory splash of fuel meant he emerged comfortably clear of those who had also pitted. Nevertheless, he wouldn’t become the outright race leader until the final five minutes.

Instead, he was kept waiting by several other podium contenders who opted to run extended opening stints. They included Tengku Ezan Ley, Adderly Fong and long-time leader Moh who initially passed Liang but was closed down by Shaun Thong as the race entered its final quarter.

Indeed, Moh’s pace dropped off to such an extent that he ended up finishing 14th.

Back at the front, Thong’s pace and consistency, as well as the decision to pit at almost the final opportunity, helped the Excape Racing Audi climb from 19th on the grid to third at the finish behind Liang who produced a similarly consistent performance en route to second.

But the star of the show was undoubtedly Padayachee who took the chequered flag 32s clear of Craft Bamboo’s Mercedes-AMG.

Fong survived a mid-race spin to come home fourth ahead of Aaron Borg who, having pitted early, spent most of the final 20 minutes battling the fast but erratic Ling. The Climax Racing driver’s first lap excursion was later compounded by a drive-through penalty for contact, but such was his pace that a top-six finish remained possible. He and Borg battled intensely before the latter finally passed the battle-scarred Lamborghini, which retired soon after.

Ley also lost time before the pitstops but recovered to complete the top-six ahead of Matthew Marsh who surged through to finish seventh after starting 32nd.

Kevin Tse was best of the real-world amateur drivers in eighth overall, while Aaron Lim and Charity Cup winner Evan Chen rounded out the top-10.