Maulana beat Boquida and pole-sitter Kelvin Chen (privateer, Porsche) by 3.4s under overcast skies in the 60-minute Sim-PRO & AM encounter before Moh romped to a 14.6s victory over Kang Ling (Climax Racing, Lamborghini) in sunnier conditions after Aaron Borg (SRT Team Sydney, Mercedes-AMG) and championship leader Duvashen Padayachee (Tarmac eMotorsports, Mercedes-AMG) collided at the final corner of the last lap. The latter initially recovered to complete the Real-PRO & AM race podium before a post-race penalty promoted Borg to third.

SIM: MAULANA MAKES THE MOST OF BOQUIDA/KIM COLLISION 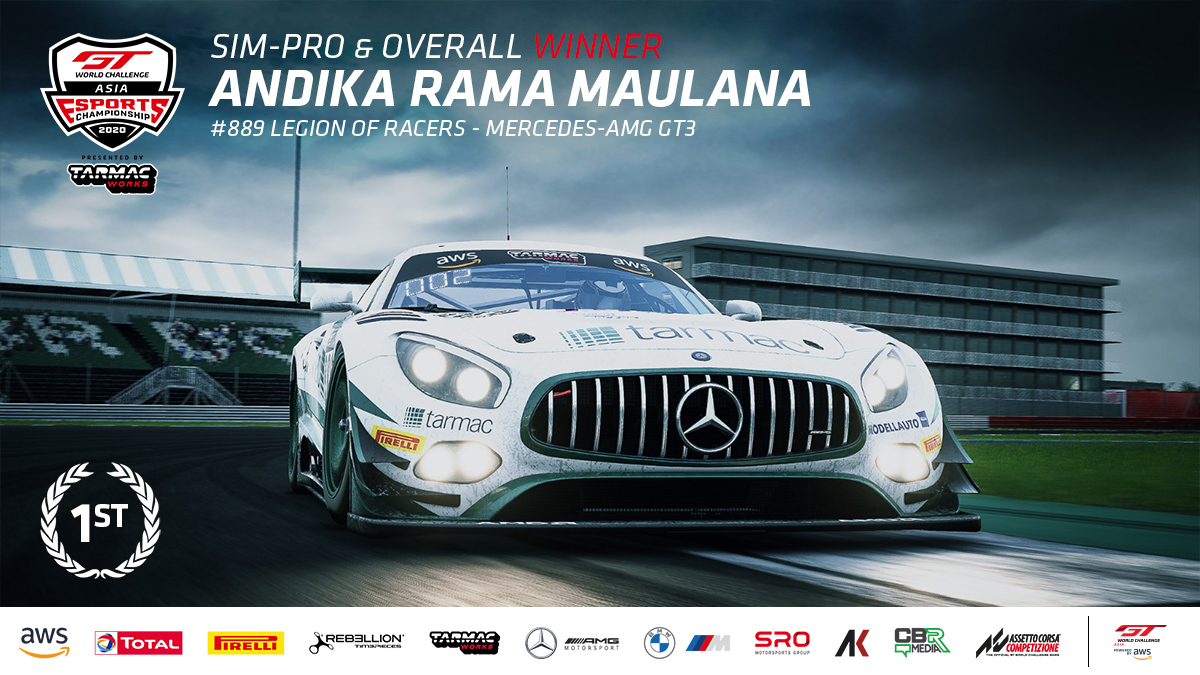 Andika Maulana was happy to play the long game en route to his first Sim-PRO and Overall victory of the season at Silverstone where an early collision put paid to Philippa Boquida and Gyumin Kim’s victory chances.

The McLarens ran one-two at the end of lap one after passing Kelvin Chen’s pole-winning Porsche before Kim’s CJ Logistic Racing Team 720S spun Boquida at Village with 15 minutes gone.

Kim’s resulting 10s penalty, to be served during his mandatory pitstop, and Boquida dropping to sixth handed the net lead to Chen who continued to circulate within a second of the soon-to-be-penalised McLaren.

Maulana, meanwhile, had been tracking the top two and took the McLaren’s pitstop with 16 minutes left as his cue to up the pace. Indeed, the Legion of Racers ace quickly closed down and passed Chen into Copse before the pair pitted together with five minutes remaining.

They emerged in the same order, albeit with a recovering Boquida – who pitted just after Kim – bearing down on both of them. A brave move at Stowe with just a minute left wrestled second overall and the AM class lead away from Chen, but there was no time to catch Maulana who took the chequered flag 3.4s clear.

Kim’s penalty dropped him to eighth, one place ahead of Kin Long Li (Wako’s Fliptable Racing, Mercedes-AMG) who fought through from 24th on the grid. Laguna Seca race winner Andrew Laurenson (Laundry House, Porsche) rounded out the overall top-10. 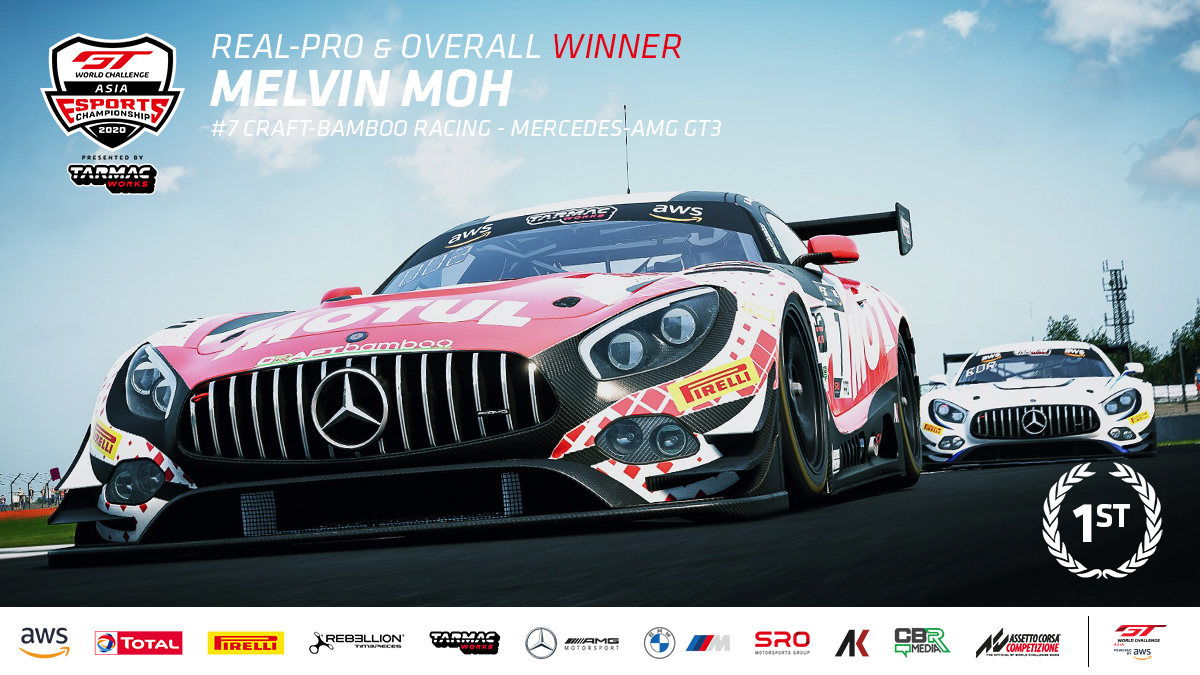 Moh’s pass around the outside of pole-winner Borg at Maggotts on lap one saw Craft-Bamboo’s Mercedes-AMG remain up front until just before half-distance when his SRT Team Sydney rival repaid the favour with an equally ballsy move at Brooklands.

He was, however, unable to shake off Moh who hit back at Club with 20 minutes of the race remaining. Borg pitted at the end of the same lap in an effort to avoid Padayachee’s undercut, but it didn’t work and the pair remained locked together thereafter.

Moh, meanwhile, spent the following two laps making good his escape before also serving the mandatory pitstop. Quick in-laps helped him emerge 3.4s clear of Padayachee, a gap that would extend to 14s by the finish despite the expected need to save fuel.

Attention instead switched to the fight for second where Padayachee and Borg were now tied together.

Their battle spilled over on the last lap when Borg bumped into the back of his rival at the final corner. That contact allowed Ling – who ran longest of all before pitting – to dive past both and into second after spending most of the race running a net fourth.

Padayachee recovered to cross the line third ahead of Borg before a post-race five-second penalty for causing a collision with Antares Au saw the positions reversed. Adderly Fong (Tarmac eMotorsports, Lamborghini) finished fifth after a relatively lonely but incident-free performance.

Alister Yoong (Axle Sports, Lexus) ran line astern with his illustrious father for much of the first stint before rounding out the top-six by mirroring Ling’s late-stop strategy. Hideto Yasuoka (The Magarigawa Club) was best of the Ferraris in seventh and debutant Louis Prette (AF Corse APM Monaco, Ferrari) completed the top-eight.

Billy Lo ended Kevin Tse’s early-season winning streak by claiming AM class victory and ninth overall. The Audi Sport Asia TSRT driver was 14s behind Tse before the pitstops but clawed his way back into contention to score the R8’s first esports win of the campaign.

Behind, Evan Chen rounded out the top-10 after fighting back from an early incident. The Laundry House Porsche initially ran third before being punted off by JiaTong Liang, which necessitated a pitstop.

Padayachee now leads the PRO championship by 19 points from Moh with Tse 20 clear of nearest AM challenger Lo.