The cream of Asia’s sim racing crop tackle the first of three GT World Challenge Asia Esports Endurance Series rounds this Saturday at the legendary Suzuka where 19 entries will do battle over 10 hours on Assetto Corsa Competizione.

SRO Motorsports Group’s European championship has already staged virtual long-distance events this year, while Asia and America’s series have only featured 60-minute races so far. But that all changes in Japan where Sprint rivals join forces in teams comprising three drivers.

And with just three Endurance rounds to contend, a fast start is essential to winning a share of the championship’s €15,000 prize fund.

The real-world Suzuka 10 Hours, or Summer Endurance Race as it’s known locally, has been staged 48 times since its inception in 1966. For the majority of those years Asia’s most prestigious long-distance GT race featured a 1000km distance but switched to the current 10-hour format in 2018 after joining Intercontinental GT Challenge Powered by Pirelli’s calendar.

Now, and for the first time, the same concept will appear in the realms of an officially sanctioned sim race.

What’s more, the Asia Esports Sprint Series has yet to visit Suzuka this season, making it difficult to gauge which of the team, driver and car combinations are best suited to its fast but also highly technical layout.

As a rule, the Mercedes-AMG GT3 performs well at most ACC circuits. But its results at Suzuka in 2020’s GT World Challenge Asia Esports finale were the weakest of an otherwise exceptional campaign. Saturday’s entry features four cars, all of which – in terms of teams and driver personnel – should be near the sharp end. Reigning Sprint champion Andika Rama Maulana joins forces with Dillan Tan and Moreno Pratama in one of Legion of Racers’ two entries, while another Asia regular – Laundry House – features the combined talents of Philippa Boquida, Andrew Laurenson and Terry Rayton. Geraedts Racing and a second Legion of Racers entry also featuring Sprint regulars complete Mercedes-AMG’s line-up.

Bentley has won all three Sprint races this year so it’s no surprise to see four Continentals – the joint most with Mercedes-AMG – lining up on Saturday. How they fare without Dayne Warren or VRS Coanda Simsport remains to be seen, but both Inspeed Racing and Flash Axle Sports have already demonstrated their potential. Indeed, Naquib Azlan lies fifth in the Sprint standings after finishing second in Round 2. LOR x Tarmac eMotorsports complete the quartet.

JMX Phantom and Fadhli Rachmat have also used the Bentley to good effect this year and lie third in the Sprint standings behind Warren and Maulana, but switch to McLaren for Suzuka’s Endurance race. Theirs is one of three 720S GT3s on an entry that also features the squad’s junior team and Octane Community Simsport.

Another Asia Esports regular, Wako’s Fliptable Racing, also switch manufacturers this weekend when its familiar pink and purple livery adorns an Aston Martin, which won at Suzuka last season. A second Vantage will be run by Z-Challenger Racing who have also entered a Lamborghini.

Entries must comprise three drivers each of whose total drive-time across the 10-hour race cannot exceed 260 minutes. 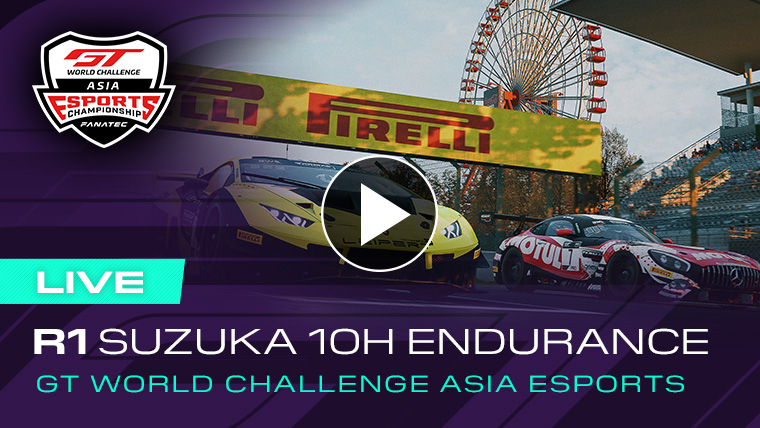