Kei Cozzolino staged quite possibly the greatest stint in Fanatec GT World Challenge Asia Powered by AWS history en route to a sensational victory in Race 1 at Suzuka earlier today after the Ferrari he shares with Takeshi Kimura made up 60 seconds and 12 positions over the final 30 minutes.

But his incredible performance was also a team effort after Kimura insisted he swap to slicks during the mandatory pitstop. Track conditions at the time suggested otherwise but Cozzolino trusted his long-time partner’s judgement, persevered and was soon lapping six to eight seconds faster than the other GT3 entries, all of whom had opted to remain on wet tyres.

Yuta Kamimura was powerless to prevent Cozzolino from swooping around the outside at the final corner as the pair started their final lap but can still be pleased with the second place he shared with Porsche Center Okazaki co-driver Hiroaki Nagai who pitted from seventh. Triple Eight JMR’s Mercedes-AMG of Prince Jefri Ibrahim and Nick Foster completed the overall podium. 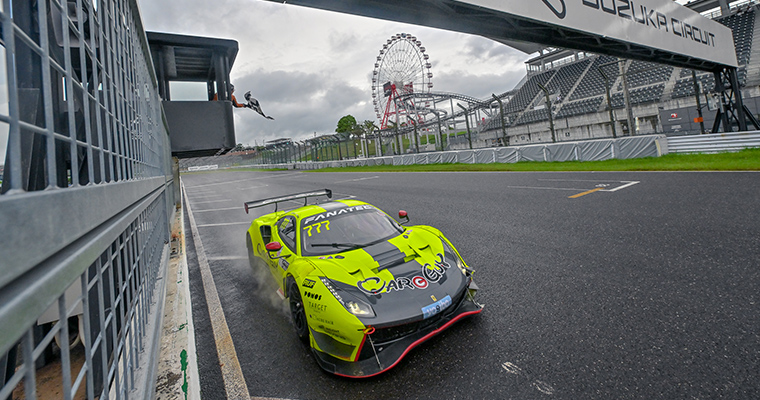 In some ways CarGuy could afford to roll the dice after Kimura, who started fourth, was spun down to 12th at the first of two restarts.

The initial Safety Car was required when Yogibo Racing’s Naoki Yokomizo, who lined up on pole, went wheel to wheel with fellow front row starter Kantadhee Kusiri into Turn 1. The Porsche’s attempted pass around the outside in wet conditions appeared to have failed until the Ferrari spun up its rear tyres on the exit and speared backwards into the inside barrier.

Silver-graded Kusiri now found himself out front against Am drivers but was unable to maximise his advantage after the race was neutralised almost as soon as it restarted when team-mate Setiawan Santoso beached EBM Giga Racing’s #8 911 GT3 R.

The pit window was fast approaching when sustained racing finally began. But while others pitted at their first opportunities, Kusiri and Hiroshi Hamaguchi – whose co-driver Mineki Okura would later inherit a penalty for the contact that spun Kimura down to 12th – remained close at the head of the field.

Tanart Sathienthirakul then initially edged clear after the stops before he was reeled in by the flying Kamimura and Foster. The trio eventually ran as one before Porsche Center Okazaki’s 911 and then Triple Eight’s Mercedes-AMG both moved past their Thai rival.

However, it was already apparent that the fight for the lead might also involve a fourth car despite it still being some distance behind. Such were the conditions that it wasn’t clear how Cozzolino was passing cars with such relative ease. Indeed, at times the Ferrari – which had earlier secured Race 2 pole – simply drove past his opposition as though they were standing still.

13th soon became 10th, then eighth and fourth in what felt like as many laps. Sathienthirakul fell with three remaining before Foster was dispatched halfway around the penultimate tour. Next up was Kamimura whose attempted defence into the Casio Triangle only briefly delayed the inevitable.

He was already eight seconds behind when Cozzolino took the chequered flag, as well as the first-ever Fanatec Japan Cup victory, one lap later.

LM corsa’s Ferrari shared by Kei Nakanishi and Shigekazu Wakisaka finished fifth after the latter passed Seiji Ara (Plus with BMW Team Studie) in the second stint. Just 0.5s separated them at the finish.

GT4 ended as it started with Team Scala’s Mercedes-AMG on top. Pole man Tashiro maintained his lead during the first two Safety Car periods and, contrary to the rest of the class, opted to run deep into the pit window. Indeed, his Mercedes-AMG was the last but one car to stop.

Co-driver Tanigawa emerged less than a second ahead of Yasuoka whose co-driver Lee pitted from second. The gap between Team Scala’s entry and that of GTO Racing’s gradually grew to six seconds over the remaining 25 minutes.

Suzuka’s second race gets underway at 12:20 JST (GMT +9) on Sunday. Watch it live on SRO’s GT World channel and J Sports in Japan. 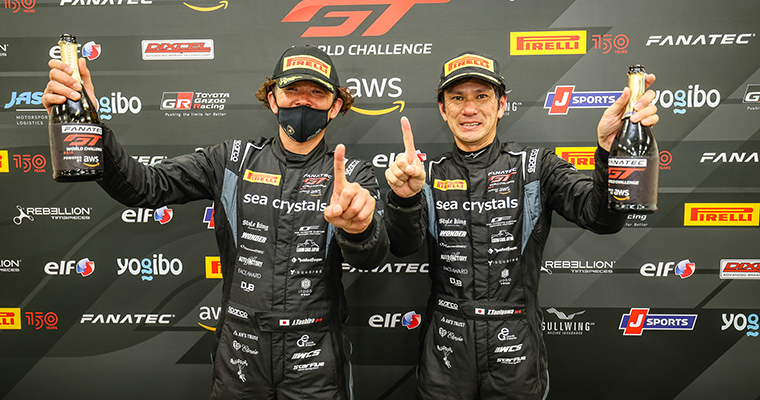