Fanatec GT World Challenge Asia Powered by AWS history was made at Suzuka today when Comet Racing’s Yusuke Yamasaki and Yorikatsu Tsujiko became the first Am crew to win a race outright, while Honda also scored its first-ever series victory.

Four Safety Car periods across the 60 minutes, one of which occurred during the pit window and another that effectively ended the race, conspired against the established front runners and played perfectly into the hands of a team that qualified slowest of the 16-strong GT3 class. They also took top honours in the Fanatec Japan Cup.

The final neutralisation prevented Prince Jefri Ibrahim from attacking the NSX but he and Triple Eight JMR co-driver Nick Foster will be pleased to have extended their drivers’ championship advantage by finishing second overall and winning the Pro-Am class. Tomohide Yamaguchi and Seiji Ara completed the rostrum for Plus with BMW Team Studie.

By complete contrast, GT4 ended how it began with Team GMB’s pole winning duo of Hiroaki Hatano and Shinya Hosokawa climbing the top step. Their Mercedes-AMG controlled the race throughout and was perfectly placed to gain a lap on the field when the third Safety Car was deployed.

Koshido Racing’s Motoharu Sato and Katsuyuki Hiranaka also finished where they started in second, while Brian Lee and Hideto Yasuoka (GTO Racing) clinched their second podium finish of the weekend.

COMET’S AMS SHOOT FOR THE STARS 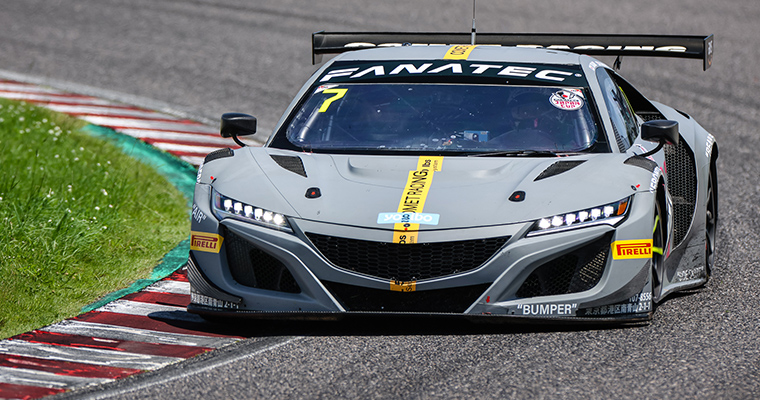 Two Safety Car periods either side of the 10-minute window made for a stop-start but also compelling hour of action.

Saturday’s star performer, Kei Cozzolino, was relying on a clean opening stint to convert pole position into a lead that would negate at least some of CarGuy Racing’s 15-second Success Penalty. Instead, BMW Team Studie’s stationary M2 CSR and errant trackside barriers – caused by Sandy Stuvik clipping the wall at 130R – resulted in two neutralisations that restricted the Ferrari.

The second Safety Car period occurred just before the pit window opened on 25 minutes. At that moment the majority of the GT3 runners, headed by Cozzolino, Foster and Ara, had already passed pit entry while the likes of Ben Porter and Am class rival Tsujiko – who were 13th and 15th at the time – approached the final corner. Both duly pitted, swapped drivers and emerged on the same lap as the Safety Car was withdrawn, effectively gifting them a ‘free’ pitstop.

But that wouldn’t become clear until the leaders pitted. Cozzolino stopped at his first opportunity while the likes of Foster and Ara ran longer into the window. The Ferrari’s Success Penalty dropped it down the order as expected but it was a surprise to see both Ibrahim and Yamaguchi emerge some distance behind new race leader Yamasaki and Porter’s AMAC co-driver Andrew Macpherson.

Whether they would have been caught by their pursuers became irrelevant soon after when Triple Eight JMR’s other Mercedes-AMG driven by Prince Abu Ibrahim and AAS Motorsport’s Kantadhee Kusiri tangled approaching Spoon, which caused further contact between Porsche Center Okazaki’s Hiroaki Nagai and GT4 driver Yuko Suzuki (CREF Motor Sport).

YamasakI had the benefit of GT4 cars between himself and Macpherson when the third Safety Car was withdrawn with 11 minutes remaining. The Australian was immediately passed by Ibrahim into Turn 1 before more GT4 traffic halfway around the same lap bunched the pursuing GT3 pack, causing Yamaguchi, Macpherson and Satoshi Hoshino to go three-wide approaching Spoon. The latter ran slightly wide, dropped two wheels on the grass and spun his D’Station Aston Martin backwards into Team Scala’s Mercedes-AMG GT4.

Recovery could not be completed before the hour was up, Race Control instead opting to withdraw the Safety Car at the end of the final lap so that Yamasaki could take the chequered flag.

Ibrahim and Yamaguchi – who was lucky not to be collected by Hoshino – followed him across the line ahead of Hiroshi Hamaguchi and Mineki Okura’s Reap Fueling Ambitions Lamborghini. The latter was running 14th but failed to pit when the window opened under Safety Car conditions.

CarGuy recovered to finish fifth despite their Success Penalty thanks to Takeshi Kimura avoiding Hoshino’s accident. He emerged from the team’s pitstop in 10th and made ground early on before Safety Cars intervened.

AMAC will be left to rue what might have been after completing the top-six, ABSSA’s Hiroshi Koizumi and Keita Sawa finished seventh, and AAS Motorsport’s Porsche recovered from its earlier altercation with Ibrahim – for which the Triple Eight JMR driver was penalised – to come home eighth.

In GT4, Hiroaki Hatano and Shinya Hosokawa came home worthy winners despite the penultimate Safety Car gifting Team GMB’s Mercedes-AMG a lap advantage over the rest of the field.

Hosokawa initially converted his pole advantage into an early lead but was tracked closely by Katsuyuki Hiranaka after the Koshido Racing driver recovered second from the fast-starting Hideto Yasuoka.

Just like GT3’s Ams, the GT4 field was far enough behind to pit while the race remained under Safety Car conditions, ensuring only pit crews and Success Penalties carried over from Saturday’s race would influence track position. GMB’s handicap-free stop meant Hatano retained the lead from Brian Lee who rejoined ahead of Koshido Racing.

However, both Motoharu Sato’s Supra and yesterday’s race winner Jun Tashiro were up to second and third by the time the next Safety Car period gifted GMB a lap advantage. Instead, the pair looked set to scrap for the runner-up spot until Team Scala’s Mercedes-AMG was the innocent victim of Hoshino’s spinning GT3 class Aston Martin.

Lee and GTO therefore inherited third in class behind Koshido’s Sato and finished ahead of the Akiland Racing Toyota shared by Masayoshi Oyama and Masayuki Ueda who won the Am class.

Fanatec GT World Challenge Asia Powered by AWS and the Fanatec Japan Cup now move on to Fuji, which hosts rounds five and six of the 2022 campaign next weekend. 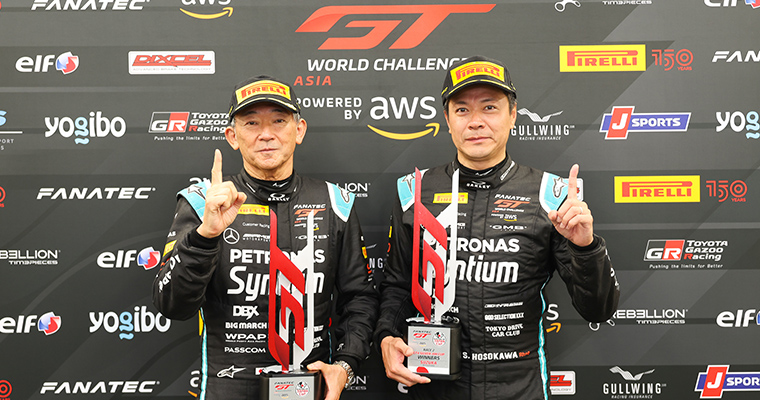