GTO Racing Team’s Brian Lee and Hideto Yasuoka sealed the GT4 championship as expected, but also race victory by the narrowest of margins after taking the chequered flag just 0.001s ahead of Team GMB’s Hiroaki Hatano and Shinya Hosokawa.

Plus with BMW Team Studie duo Tomohide Yamaguchi and Seiji Ara finished 1.2s behind the overall race winning Aston Martin and another six seconds clear of Hiroaki Nagai and Yuta Kamimura (Porsche Center Okazaki) who completed the final podium of the year.

Meanwhile, Triple Eight JMR’s disappointment at missing out on the overall drivers’ title was tempered slightly by Foster and Prince Jefri Ibrahim winning the GT3 Pro-Am crown, as well as the Australian squad collecting the Teams’ title.

CARGUY RECOVERS TO CLINCH THE CROWN 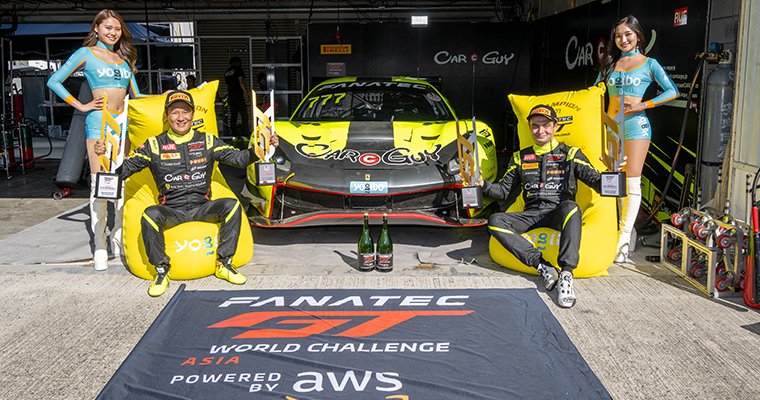 Okayama’s season finale will be remembered as a tale of two races: the fight for overall victory between teams with nothing to lose, and a title battle that looked to be over before it barely begun.

The drama unfolding behind made it easy to overlook D’station Racing’s performance. Fujii qualified 0.3s ahead of his nearest rivals and, after rebuffing an attack into Turn 1, established a 3.3s lead – via fastest lap – before handing over to his co-driver.

The Aston Martin’s previous victory, at SUGO, owed everything to confusion elsewhere. But not so at Okayama where Hoshino was often much further ahead of Team Studie’s BMW than the final victory margin suggested.

Pre-existing Success Penalties for the other front runners meant Ara – who started third – and Yamaguchi were in prime position to finish second anyway. But that was without factoring in the first lap incident that initially threatened to derail CarGuy’s title bid after just two corners.

An excellent getaway allowed Foster to challenge Fujii around the outside of Turn 1. However, the Mercedes-AMG ran wide and opened the door for Cozzolino to dive down the inside. The pair then sprinted three abreast with Ara towards Williams’ left hander where Foster – now on the inside – tagged the Ferrari, which spun into the barriers and triggered a Safety Car period.

Cozzolino was able to continue a lap behind, via a brief pit visit, but CarGuy’s championship chances were hanging by a thread after Foster had continued in second ahead of Ara, Kamimura, Jazeman Jaafar and Reid Harker.

That order remained unchanged over the first 20 minutes until stewards handed Foster a 100-second stop-go penalty for causing contact, as well as gaining an unfair and lasting advantage.

Triple Eight JMR immediately served the penalty but emerged behind Cozzolino, who was still a lap down and outside the points. It was at this moment that the advantage swung back the way of CarGuy whose crew led Foster and Ibrahim by three points before the start.

The time lost and Success Penalties – 10 for CarGuy and five for Triple Eight JMR – meant there was little hope of recovering the lost ground. However, Ibrahim gave it his all during a decent scrap with Kimura after the pitstops. The pair eventually finished 12th and 13th.

Back at the front, Hoshino initially pulled clear of Yamaguchi who was busy defending second from Nagai. However, the battle never really materialised and, instead, the latter ended up defending third from Jaafar’s co-driver Prince Abu Ibrahim who hounded the Porsche until the finish.

Sathienthirakul and Kusiri beat Yogibo Racing’s Ferrari to Silver class victory on a day that began with Naoki Yokomizo as an outside overall title contender.

Am class winners Hamaguchi and Okura finished an excellent seventh overall, while EBM Giga Racing’s Setiawan Santoso and Harker rounded out the top-eight.

Not even the maximum 15-second Success Penalty could prevent Lee and Yasuoka from clinching their second win of the weekend and the GT4 title in style. GTO’s crew just had to finish in order to secure the championship but they did far better than that thanks to Lee’s post-pitstop fight back.

Title rival Hosokawa led the first half of the race from pole but was pursued all the way by Yasuoka who pitted not far behind. The Mercedes-AMGs’ respective Success Penalties widened the gap but Lee was able to chip away at the deficit that stood at more than 10 seconds at one stage.

However, he wasn’t in front of Hatano until the race’s final metre when he nosed ahead of Team GMB’s car at the line. The unnoticed change also blindsided championship organisers who mistakenly presented Hosokawa and Hatano with the winners trophies on the podium!

Team GMB’s crew might have missed out on the overall title but they still collected the Fanatec Japan Cup GT4 drivers’ crown.